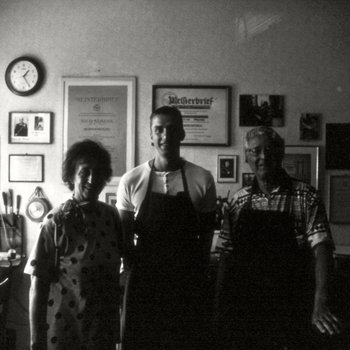 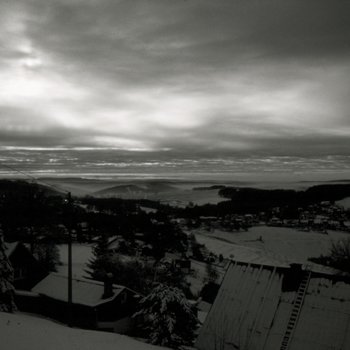 I fell in love with the clarinet quite late (’97) when I borrowed a plastic Bundy from Paul Klotz. Instantly I was captured by the wayward instrument and when I managed to produce a tone of some sort, I went out to get some lessons. Rik Meesters, my classically schooled but adventurous teacher, introduced me to the conventional method of learning how to play clarinet with books like “A Tune a Day”. But being as undisciplined and untamable as my instrument we had much better fun just playing together, so the lessons soon turned into improvisation sessions (more about the Grondtoon sessions in a future post!).

At the time Rik co-owned a wind instrument repair shop and as we both became more and more interested in the history of the clarinet, we planned our first trip to the Vogtland in Saxony, Germany in 2000. The Vogtland has a unique heritage of European instrument manufacture and the last Master Instrument Makers still reside in its picturesque villages.

One of the nice things about Germans is that they take cultural heritage quite seriously. So apart from several museums, an international school for instrument making and all kinds of musical festivities there also is a research institute for instruments made in the Vogtland, the IfM in Zwota. The IfM has a very nice library, does acoustical and psycho-acoustical measurements, wood value analysis and much more – very interesting stuff! It was at the IfM that Rik and I obtained a list of registered clarinet makers in the region on our second trip.

Our first mission in 2000 however was to learn about the differences between Boehm (French) and Oehler (German) clarinets, apart from the obvious system variations. And to try to find Rudolf Gottsmann in Wohlhausen, the maker of the Reform Boehm clarinet I acquired after trading my Noblet bass clarinet.

The Gottsmann (B-clarinet) had an exceptionally dense and rich tone. Nothing like my first and very own Parisian Paul Dupré, nicknamed the Tank, which sounded much more extrovert. In hindsight I do regret the trade-in of my bass clarinet, but at the time I felt I had to choose my specialty. Also, I would have never found the Vogtland – my home away from home –, my present clarinet and most important its makers Winfried Otto Nürnberger and Nico Sämann at Fa. W.O. Nürnberger.

Something was wrong with the Gottsmann though. Somehow its tone was restricted and its flow reduced. Rik and I suspected the original barrel joint was replaced and decided to find Rodulf Gottsmann from Wohlhausen to request him to make a new one. Unfortunately Herr Gottsmann had past away, and the man answering the door at his workshop thought we were a couple of vague and not to be trusted Czechoslovakians. So we had to find someone else to make a new barrel.

When the new barrel was sent to the Netherlands some weeks later, I hoped I would be able to capture the full potential of the Gottsmann. It was months, numerous other alterations and mouthpieces later that I finally gave up trying to revive the Gottsmann.
A second trip was planned for 2001. This time we decided to visit as many Master Clarinet Makers as possible, guided by the list we got from the IFM. I got to play the very best soloist clarinet models made in the Vogtland. Würlitzers, Adlers, you name them. It was an eye-opener to actually meet the makers of all these magnificent instruments and be invited into their homes to play on their clarinets. At the second day of our stay we drove by Fa. W.O. Nürnberger. Somehow, they were not on our list. But we decided to ring the doorbell anyway.

At first Herr Nürnberger was a bit confused with my visit. I explained that I was searching my future clarinet and he asked me whether I was a soloist or an orchestral member. When I replied I was neither, he gave it one more shot by asking if I was a jazz musician. In all honesty I did not think of myself as being a jazz clarinet player either, and in a last attempt to assess me and my interest, he asked what I would be willing to spend on an instrument? I replied that if the instrument was right, the price would not matter.

About fifteen minutes later I had a life changing experience. Laying before me was pure gold. I instantly knew, without even having played the clarinet, this was the one. My clarinet. And playing it was an epiphany. Never before had a clarinet been so willing in my hands – and I did not even know how to play Oehler system clarinets!

I went back the next day to make sure that what I experienced was real and promised to return as soon as possible to order a clarinet built by Herr Nürnberger. But more on the Nürnberger in Part II!

Only the second track, ‘Tyven’ – meaning calm but also abate, die down and fade away in Finnish – of ‘Solo‘ remains of all the hours I played the Gottsmann – in case you want to hear what it sounded like. The Paul Dupré is featured on ‘Ocean Wave‘, ‘NEBO SESSIONS‘, ‘Offret‘ and the third and forth track of ‘Solo‘ and the Noblet bass clarinet in ‘To BE-AT‘. All other online recordings of me playing clarinet are with the Nürnberger clarinet.